Today I continue my quest in creating and posting one block a day of the fabulous That Town And Country Quilt by the lovely Susan-Claire Mayfield. This is day two hundred and sixty-three of that project.

The GAMBLES store in Granby has been in business since 1952.

This year it sold and the name is no longer Gambles.

Gambles was a staple in my life. Anything we needed when I was growing up we could most likely get it at Gambles.

At that time Sam Childress owned and operated Gambles. He was on the floor every day. Customer service was #1 for Sam. In fact, I have thought of him often as I have tried to have the level of customer service he had.

Sam was a great guy, I went to school with his son, Gary, we were born 2 days apart. I got my first bicycle from Sam and all the appliances in my childhood kitchen.

When I was a very broke newly married I bought a television and a table and chairs on layaway. You cannot imagine what all was in that store! Sam retired and sold the store to a man that I think was named Mr. DeForest. I’m not positive because I was gone for a little while then.

When he sold it Casey Farrell bought it and was a super store owner, he dealt mostly in appliances and again customer service was king. He would deliver your appliance, hook it up, and take away your old one. I have been friends with Casey and his wife Rhonda for a long time.

Then on June 4, 2004 a wingnut named Marvin Heemeyer came down main street in Granby in an armored bulldozer, demolishing buildings as he went. A political dispute was at the root of this rampage and because Casey was part of our town government Gambles was one of his targets.

That dozer drove through a bank and the newspaper building before driving straight into the Gambles store. That’s where his journey ended because he hadn’t figured on a partial basement. The bulldozer dropped in and stuck there.

He couldn’t get out. He died that day of a self-inflicted gunshot. It was quite some time before Casey was able to rebuild Gambles but he did, and served Grand County for several more years.

I’m sure the new owner will do just fine as an appliance store owner, but for me it’s the end of an era. 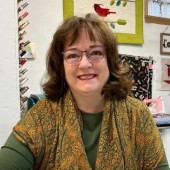 Block-A-Day 161 – This Is The Captain Speaking

Fabric Nook Newsletter May 2022 has dropped! If yo

Fun kit at the Fabric Nook. Includes binding and b

Exclusive at the Fabric Nook, color your own ornam

Schedule change! All Bottled Up class is this week

Pillow made from a Hoffman panel.

Yesterday in my shop we put Christmas fabrics into

Tina’s results are negative; she’s out of quar

I may have been exposed, so the Fabric Nook will b